Meditations for The Month of Saint Joseph 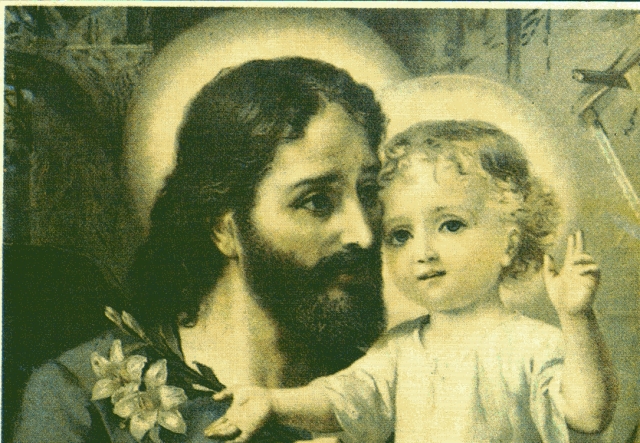 Behold, the beautiful month of St. Joseph!…Aside from the Blessed Virgin, Saint Joseph was the first and most perfect adorer of our Lord.  Faith, humility, purity, and love – these were the keynotes of his adoration.

Devotion to Saint Joseph is one of the choicest graces that God can give to a soul, for it is tantamount to revealing the entire treasury of our Lord’s graces.  But only our Lord can reveal him to us, for he is hidden away .

Silent and solitary, Saint Joseph was always united in mind with Jesus and Mary; never did his thoughts wander from this divine center.  We are too worldly-minded to grasp the recollection of Saint Joseph.  Love ruled his life…We have close to us just as much as Joseph…we have our Lord in the Blessed Sacrament, but our poor eyes fail to see Him.  Let us become interior souls and we shall immediately see.

Another meditation from St. Eymard:

God has bestowed upon Saint Joseph a special mission in the Church….Is he not the chosen one who enabled Christ to enter into the world according to the laws of order…?   Next to [the Virgin Mary], the Church owes her greatest debt of gratitude and veneration to Saint Joseph, for he is the key to the Old Testament.  It is by him that the patriarchs and the prophets reaped the fruit of God’s promise.  Alone among them all, Joseph saw with his own eyes and possessed the Redeemer promised to the rest of men.

We can well say, therefore, that Saint Joseph was prefigured by the patriarch Joseph, who kept supplies of wheat for his people.  But how much greater than his prototype was Saint Joseph.  The old Joseph gave the Egyptians mere bread for their bodies.  Saint Joseph nourished and with tenderest care preserved for the elect of all ages Him Who is the Bread of Heaven and giver of eternal live.

…Saint Joseph, the greatest of saints after Mary, suffered more than all the saints…The source of his suffering lay in his deep, tender, and enlightened love for Jesus and in his veneration for the Virgin Mary.  All the elect must climb the hill of Calvary, and it is only through the wounds in His hands and feet that they reach the heart of Jesus.  It is not so much a question of penitence as of love; penitence only pays a debt, but love goes further and crucifies itself with Jesus and for Jesus.

Only in heaven will we shall we grasp the full extent of Saint Joseph’s suffering; but what we already know from meditation helps us to estimate his merits and the intensity of his love…..Love is not joy and consolation:  these are only the reward of love.

Aspiration:  St. Joseph, grant that we may share like you in the sacrificial spirit of Jesus, Victim in the Eucharist.

Meditation from St. Bernard of Clairvaux:

Joseph’s character and qualities can be deduced from the fact that God honored him with the title of father, and, although his doing so was a mere matter of convenience, this was what he was known as and believed to be. Joseph’s own name, which, as you know means “increase,” supplies further indications. Call to mind the great patriarch of old who was sold into Egypt, and you will realize that it was not only his name that our saint received but also his chastity, innocence, and grace.

His brothers’ envy had caused the earlier Joseph to be sold and taken to Egypt, thus symbolizing the selling of Christ: the later Joseph carried Christ into Egypt, fleeing before Herod’s envy. The former Joseph kept faith with his master and would not become involved with his master’s wife, while his namesake faithfully protected his own spouse, the mother of his Lord, acknowledging her virginity and remaining continent himself. The first Joseph had the gift of interpreting dreams: the second was given a revelation of the divine plan and a share in its accomplishment. Joseph the patriarch stored up grain, not for himself but for all the people: our Joseph was given custody of the living bread from heaven to keep safe both for himself and the whole world.

There is no doubt that the Joseph to whom the Savior’s mother was engaged was a good and faithful man. He was, I say, the wise and faithful steward whom the Lord appointed to support his mother and care for himself in childhood, singling him out for his complete reliability to help him with his momentous plan.

Added to all this, scripture tells us that he was of David’s house. Joseph was obviously of David’s house, a true descendant of the royal line, a man of noble birth and still nobler disposition. That he was David’s son was seen from the fact that he in no way failed to maintain his standard: he was a true son of David not only as regards physical descent, but also in his faith, holiness, and devotion. In him the Lord found, as it were, a second David, a man after his own heart, to whom he could safely confide his most holy and secret design. To him as to another David he revealed the unfathomable, hidden depths of his wisdom, and granted him knowledge of that mystery which was known to none of the princes of this world. In a word, that which many kings and prophets had longed to see and had not seen, to hear and had not heard – that was granted to Joseph. He was allowed not only to see and hear him, but also to carry him, guide his steps, embrace and kiss him, cherish and protect him.

It is not only Joseph, however, but Mary as well whom we believe to be a descendant of David, for she would not have been engaged to a man of David’s line unless she herself had been of that line. Both of them, then, belonged to David’s family, but it was in Mary that the oath which the Lord had sworn to David was fulfilled, while Joseph was privy to the promise and witnessed its fulfillment.

From the book, Life of the Blessed Virgin Mary, by  T. Kelly:

Father Reis, a pious defender of all those privileges of Saint Joseph which are not at variance with the Scriptures and the traditions of the Holy Fathers, appeals to the tribunal of reason to show the probability of the privilege of being sanctified in his mother’s womb, …His argument is as follows:  Saint Joseph was chosen by a Lord of infinite wisdom to espouse the Virgin Mother of Jesus.  Whence we must suppose between these spouses all that similarity which the sacred writings do not oppose;  that is, likeness in favors, and (excepting the happy moment of Mary’s conception) likeness in anticipated sanctification, and in all those qualities which make espousals more conformable to that divine decree, whereby God established as a suitable condition, likeness between spouses. (Gen 2:18 – “let us make him a help like unto himself.”)

…so that, examining the designs of the Almighty who created them to be joined together in a sacred espousal, we may confidently affirm that Joseph in his soul and virtues was so clear and so accurate a copy of the Virgin Mary, who was the original, that by merely seeing it or recalling it to memory, we form a beautriful idea of the feature and virtues of his spouse, “to whom He that is might did great things.”

Segneri believes this likeness between the holy pair so great and so general, that we may affirm that the future espousals with Mary caused Saint Joseph’s sanctification before his birth.

….It was proper, then, that Joseph should resemble the Virgin, not only in royal blood, but also in manners, mind, habits, for none is ignorant that the first gift sought in a spouse is similarity.

+ I find that we have said all, when we say, “Erat autem Joseph factus ad similitudinem Virginis sponsae suae.”  – “Joseph was made to the likeness of his Virgin spouse,” (Binet.)

– continued from Life of the Blessed Virgin Mary:

No part of Saint Joseph’s body has been found in this world, hence, it is commonly believed that his body, united to his soul, is in heaven.  But several churches venerate what are called sanctified relics.  Perugia, a city of Umbria, in the States of the Church, has the rare happiness of possessing the nuptial ring given by Saint Joseph to the Blessed Virgin…

The Camaldolese fathers, at Florence, have in their Church of the Angels a staff of Saint Joseph…Father Ricca relates some miracles wrought by the application of this staff.

lifelong Catholic; homeschooled our children; have been regularly attending the Tridentine Mass for at least the past 17 years.
View all posts by ihmprayforme →
This entry was posted in Month of St. Joseph. Bookmark the permalink.