The Gravest Consequence of the Novus Ordo Mass

Hey, it is not I saying these things.   (I am happy to read, though, that Father agrees with my thinking. )   🙂

The full article is posted at Rorate Caeli: 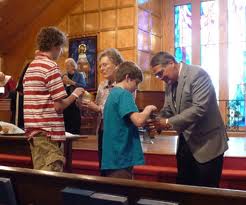 "The gravest consequence of the New Rite is, however, the dishonour of God. 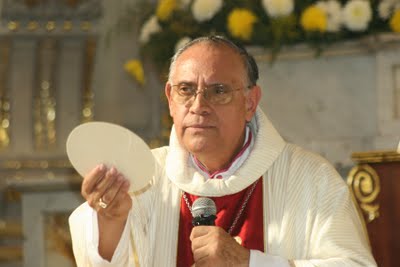 He is handled clumsily

“The gravest consequence of the New Rite is, however, the dishonour of God[10]. The iconostasis of silence has been dismantled. The Lord is called forth in a vulgar tongue, in words composed by His enemies. His Presence is ignored, His Person is demeaned.

He is handled clumsily: if He falls, it does not matter. He is placed on unblessed tables, segregated from His friends. His garments have been reduced. He, The King of Kings in the state of Immolation, is placed in vulgar, primitive vessels. As the people stand or sit, and think that they are listening to a mere tale, He is crucified and dies before their eyes. He is raised above their heads: “Behold the Lamb of God!”: they stand and stare. He is delivered over to them: He, Almighty God, their Creator and their Highest Good. He is placed in their unclean hands. They receive Him into their darkened hearts, they brush Him off their hands, they trample over Him unwittingly, they take Him home. He is consigned to their caprice or their malice.”

Isn’t that the truth!

Here is part of a comment made about two years ago, and which I found on another   blog but which is still most relevant today.

Professional liturgists and singers tried to force us to learn a new liturgy and new songs.

“I was around during the liturgical upheavel of the 1970’s, I remember vividly the first NOvus Ordo Mass on Palm Sunday 1970, and the disapointment of the people, as we had been told that the adjustments to the Old Rite made in the years between 1965 and 1970 would be the final changes, that THIS was the Liturgy that the Council Fathers wanted. THen came the Novus Ordo with the outlawing of Latin, the disapperacne of Chant, the enforced break-up of choirs, vestments, statues, communion rails, altars and of whole sanctuaries. Communion by laypeople, standing, even on the hand, followed.  Professional liturgists and singers tried to force us to learn a new liturgy and new songs, but to no avail: catholics remained from then on forever silent.“

Find the nearest TLM,  and there, alongside our Blessed Lady,  all the saints and the angels.  properly worship the Most Holy Trinity with all the due reverence, solemnity, and awe that we can give God.

The Traditional Latin Mass, the most beautiful thing this side of Heaven!

My God! My God! I love Thee in the Most Blessed Sacrament!

lifelong Catholic; homeschooled our children; have been regularly attending the Tridentine Mass for at least the past 17 years.
View all posts by ihmprayforme →
This entry was posted in See, I told you so! and tagged Novus Order Mass;, songleader. Bookmark the permalink.