What’s “Iodinews”, and Why are They Saying These Things?

Aaaahhhh, but it does my heart good to hear it!  A few years ago, aside from mostly the SSPX, hardly anybody would dare say such things; but the tide is turning. The dam has sprung a leak and there is no possibility of containing the resurgence of tradition. This article comes posted with our official seal of approval.  Link to the source, Iodinews: 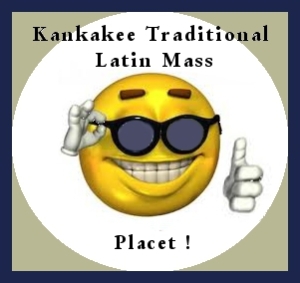 Do people understand the Mass better in English?

Did Jesus speak Latin? What about His conversation with the Roman centurion, recalled at every traditional Latin Mass?

“Domine, non sum dignus, ut intres sub tectum meum.” Surely, these words are quoted in the language in which they were spoken. Can we not expect Jesus’ reply to be in the same tongue?

Officers of an army of occupation (as the Romans) tend not to speak the language of the occupied country. Rather, the natives learn the occupier’s language. How many members of our World War II armed forces returned from Japan and Germany speaking the languages of those nations?

Would the members of the Sanhedrin make their scarcely-veiled threat to Pilate in Hebrew? What about Jesus’ conversation with Pilate? Do you think the two spoke through a translator? Isn’t it as likely that our Lord spoke Latin the same as the sign nailed to the cross above His head?

Be careful of assuming that Latin is merely a novelty. Latin unified the Catholic church in many ways.

You could go to Portuguese-speaking Brazil (or Catholic Nagasaki, Japan) and expect exactly the same Mass. Being a dead language set in stone, the liturgy was also preserved. It couldn’t arbitrarily be “changed.”

Latin also unified the focus of the Sacrifice of the Mass. The priest offered worship toward the Crucifix, tabernacle and altar. They were and are one — Christ’s sacrifice, our salvation. True worship demands oneness.

People say they understand the Mass better in English. Do they? Then why don’t they avail themselves more of the Grace of the Sacraments, specifically confession? Why “six” Protestant advisers in compromise of [the] Latin Mass? The No. 6 represents man (compromise by Pope Paul VI).

Catholics today seem embarrassed to use the word “Catholic.” Why? Catholicism simply represents Christ’s desired unity of His Mystical Body, the church, throughout the world.

Without a unified church within, the Body succumbs to the disease of counterfeits (so-called Christians) from without. Christ taught monogamy — He has only one bride. Latin unified and protected His bride, the Catholic church, through the Eucharist.

lifelong Catholic; homeschooled our children; have been regularly attending the Tridentine Mass for at least the past 17 years.
View all posts by ihmprayforme →
This entry was posted in See, I told you so! and tagged 6 protestant observers, Jesus spoke Latin, Latin shows unity of the Church, Traditional Latin Mass, vernacular Mass. Bookmark the permalink.